The August bank holiday weekend (2014) was, at one point, to be the date that Swindon Panel closed (this was the second planned date, the first was in May 2014).

The Swindon Panel area (except the Kemble Line) is to be ‘re-locked’ and ‘re-controlled’. ‘Re-locked’ as a new solid state interlocking would be provided to interlock the points and signals, replacing Swindon Panel’s current nine electromechanical interlockings, and ‘re-controlled’ as the system would be controlled from the Thames Valley Signalling Centre in Didcot, instead of Swindon Panel as currently. This is slightly different from a ‘re-signalling’, as the layout of points and signals on the ground will be largely the same as it currently is, so apart from changes to the numbers on the signals, and a few minor alterations to spacing, the system will appear generally the same to drivers.

In tandem with the re-lock and re-control taking place, the single line between Swindon Loco Yard and Kemble was due to be re-doubled and re-signalled. Although a separate project, this was due to take place at the same time.

Unfortunately, delays in the installation of the required equipment for the completely new signalling system meant that the entire panel area was not ready for resignalling in August, and the panel closure was deferred (as reported in earlier newsletters). The Kemble Line work, however, could not be deferred any longer. So this work DID take place over the bank holiday weekend.

The last Kemble Line train signalled by Swindon Panel was 2B99, 2201 (Mon) Cheltenham Spa to Swindon on Monday 18 August. (The last down train was 2G93). The line was then taken under engineer’s possession. At 0108 on Tuesday 19 August the Kemble signalling power supply was switched off. The signals went black, the panel went red, and the Kemble Line was gone from Swindon Panel forever. 27 July 1968 – 19 August 2014. 46 years and three weeks of service to Swindon MAS.

The new crossover at Kemble was brought into use. The crossovers at Rodbourne remain out of use for the time being.

Swindon Panel’s signals were removed and new signals for TVSC uncovered. The new signals have a prefix ‘SW’ (for SWindon area).

Train detection is now by axle counters throughout. There has been a fairly long axle counter section between Moredon and Kemble Wick since 1989 (0600 on Monday 29 May 1989 to be precise!). This was provided due to the unreliability of the very long, multi-section track circuit that preceded it. 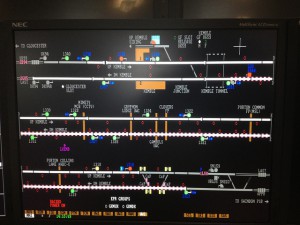 A new Alstom Smartlock interlocking fitted by Signalling Solutions and controlled by a Delta Rail IECC workstation was provided at TVSC to control the new signalling. At 0453 on Bank Holiday Monday 25 August the possession was withdrawn, and at 0500 the Swindon Workstation in TVSC opened for business. The first train signalled was 2Z22, 0529 Cheltenham Spa to Swindon. It ran on time (or 1E) all the way. If you have visited TVSC on one of our visits, the new Swindon desk it so the left of the Didcot desk.

Minety Level Crossing is still closed to road traffic (due to be commissioned on 28th August) as a CCTV level crossing (formerly manual gates), controlled from the Level Crossing workstation in TVSC.

Purton Common user-worked crossing was due to be upgraded to miniature red and green lights, but this has also not yet happened and the crossing remains as a UWC+T for the time being.

Another footpath crossing, Clovers, has been upgraded from UWC to UWC+T with the fitting of telephones for users. Gambols Farm and Gryphon Lodge remain as UWC+T.

The ground frame controlling access to the siding at Kemble survives(!) The Annett’s key now being released from the IECC.

The fringe between Swindon Panel and TVSC is easy to manage on the down, as Swindon Panel signal trains to their last exit button in rear of TVSC’s SW.1313, and TVSC control that signal, just like any other TCB fringe.

On the up, however, there being points in the overlap of Swindon Panel’s first signal (SN.159), TVSC has to be a little careful clearing their last signal (SW.1316) to avoid ‘snookering’ Swindon Station. For example, a down train leaving platforms 1 or 2 towards Kemble cannot depart while a train is signalled up to the signal immediately outside the station, SN.159, which is now Swindon Panel’s first signal. There are also routes on Swindon Panel to a limit of shunt in the overlap of SN.159! To combat all this, Swindon Panel has been provided with a slot in the equivalent position to SN.157, which controls TVSC’s last signal, SW.1316. This allows Swindon Panel to maintain flexibility in Swindon station with Kemble-bound trains on platforms 1, 2 and 3, while maintaining safety against the conflicting moves.

In Swindon Panel the panel tiles for the Kemble line have been removed or covered over and, of course, rescued for ultimate re-insertion into the panel in preservation. We are extremely grateful to Network Rail and their contractors for minimising the wiring alterations to the panel in the course of this work, including leaving the majority of the panel wiring in place for us. The only wiring alterations that have taken place are in connection with the provision of the slot switch.

The date for the migration of the rest of Swindon Panel to TVSC remains in the air – the ‘first part of 2015’ is the current official estimate…..

We are delighted to have arranged a visit to operate the Lancashire & Yorkshire Signal School layout at the National Railway Museum.

Those who have already expressed interest will be contacted shortly with details of how to secure a place. Remaining tickets are now available, first-come-first-served.

As part of this Swindon Panel visit you will be able to turn your hand to being a signalman in one (or more!) of the signal boxes on the layout, each of which is equipped with a fully-interlocked miniature lever frame and full size block instruments. Each attendee will be allocated two half-hour slots on the layout during the day. At least one session observing others operating is definitely recommended for enjoyment and appreciation.

That also gives plenty of time for a good look round the rest of the National Railway Museum, exploring hundreds of years of railway history and thousands of objects that shaped its course.

Places on the Panel Society visit cost £10, which includes the ‘suggested donation’ for entry to the NRM and to the group who operate the L&Y Layout.

In order to confirm your place on this outing please send us your ticket money by either card, PayPal, cash, cheque or online transfer via the instructions in the link above. We will confirm receipt of all ticket money.

We look forward to seeing you there!

There are now over 1100 photos in the Swindon Panel photo gallery!

There are a lot of photos of the panel itself at various staged in its history, and now there is a set of albums for around the area that Swindon Panel controls, showing signals, points, junctions and other trackside paraphernalia that goes with a signalling system!

It is now possible to order your tickets for the Family Day at the South Devon Railway, including signalling tour and signal box visits, online!

Visit the Ticket Page on HOPS to book yours now!

Full details of the event – here.

Have you got your ticket yet….?