Saturday 23 January saw the next stage (2b) of Swindon Panel’s decommissioning, and transfer of signalling control to the Thames Valley Signalling Centre.

TVSC previously controlled as far as Rushey Platt (since November). The TVSC’s control has now been extended to include all the Main lines as far as the fringe with Bristol at Corsham, including the junctions at Wootton Bassett and Thingley, and station at Chippenham. The first part of the Badminton line is also now controlled from TVSC as far as the new fringe with Swindon PSB at Brinkworth.

Swindon Panel only has a relatively small amount of railway left to control: just Brinkworth to Alderton, including the loops at Hullavington. This will be the situation until the final stage (2c) of the decommissioning, when Swindon Panel will end its service with the ‘big’ railway on 20 February.

Photos of the panel in its new state…. coming soon!

Take up the Challenge – Take your Turn!

It’s one month to the decommissioning of Swindon Panel, and we are delighted to be able to publish our programme of dates for the recovery of Swindon Panel. At the start of this work Swindon Panel will be in full Network Rail use, signalling trains at 125mph, and by the end it will be owned by us at Didcot Railway Centre! We intend to be in full force at weekends after the panel closure on 20 February to the hopeful move date on 2/3 April.

This really is the time for everyone with any involvement or interest in the preservation of Swindon Panel to put their hands to the pumps and help out. We will never have a job of this magnitude or significance again. If you only intend to get practically involved with the project once this year, this is the time.

We invite all members and supporters to accept the Swindon Panel ‘Take Your Turn’ Challenge! Your challenge (which we hope you will accept!) is for every single member to help by ‘taking your turn’ on at least one turn of this programme of dates.

No particular special skills are required (but if you have them we’ll be happy to use them!), just a willingness to get stuck in with the work. Full instruction will be given and no-one will be expected to work alone or doing any work they’re not comfortable with. The work is changeable by its nature, and a lot will depend on progress, but we will certainly have work to do on all the dates.

More details and dates of the programme: http://www.swindonpanel.org.uk/take-your-turn-challenge-swindon-panel-recovery-programme-dates/

Thank you very much to the SPS members who helped Santa in his visits to Didcot in December.

Our contribution was acknowledged in the DRC staff newsletter: 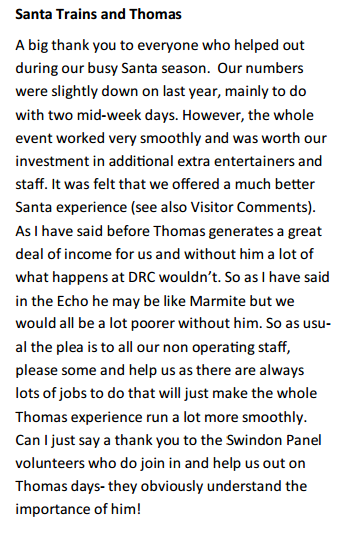 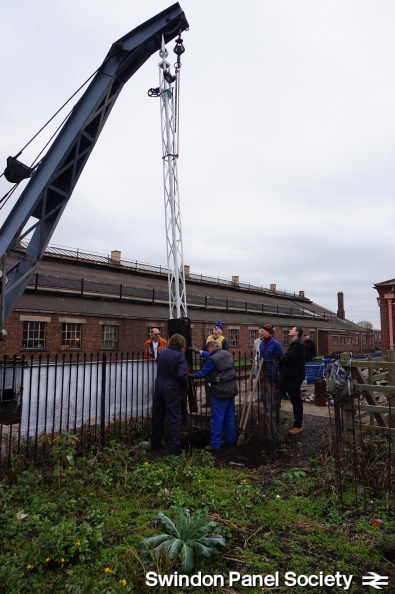 Martin Baker, of the GWS S&T, explains the background to the lattice post that we showed you a couple of weeks ago:

On Sunday 22nd November the S&T Department, with the valued assistance of Maurice and the crane, erected a new signal at Didcot – the first for quite a number of years.

The structure in question is the unusual (for the GWR) lattice post signal originally installed at Wheatley at the turn of the last century and acquired by the Society in 2012. Since that time it has been restored at the back of Winscombe hut under the direction of Chris Chalet.

When fully fitted up, the signal is destined to become an interactive exhibit as part of the new signal building, and is the first item to be installed in that area. We hope its arrival will spur others on!

We would also wish to thank Pete Gransden for giving up a couple of square feet of his garden to this post, we can only hope that he doesn’t try to trail runner beans up it… The ladder, lamp and arm will be fitted early in the new year.

Meanwhile a second interactive signal for internal display in the new building is now under restoration, with fittings being wire brushed and painted in early December.

Thanks for answering our questions Martin! 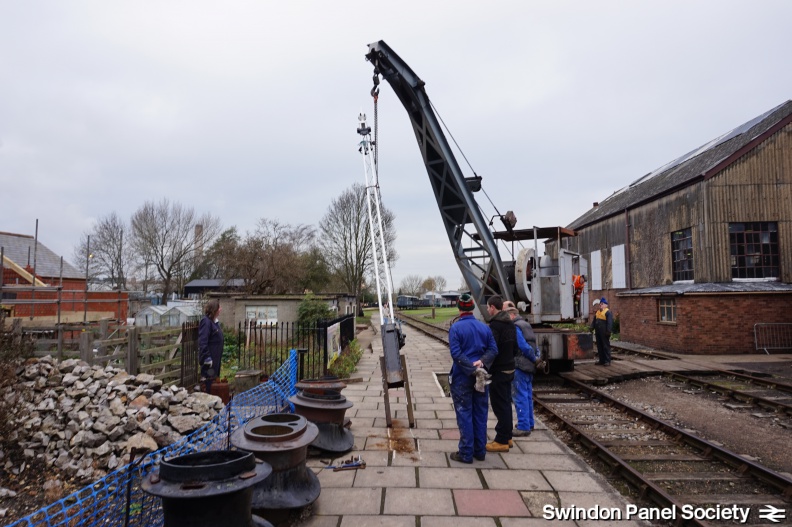 Thank you very much indeed to Cheryl Davis, the Society’s Membership Secretary.

If you are a member of SPS you will have received a letter from Cheryl at some point, thanking you for joining or reminding you to renew!

Cheryl is hanging up her Membership Secretary’s hat now and handing over to a new person… who will be revealed later. Cheryl will still be following the progress of the panel with interest (not least because her husband is the treasurer!)

Thank you Cheryl – We hope you enjoy you Swindon Panel chocolate! 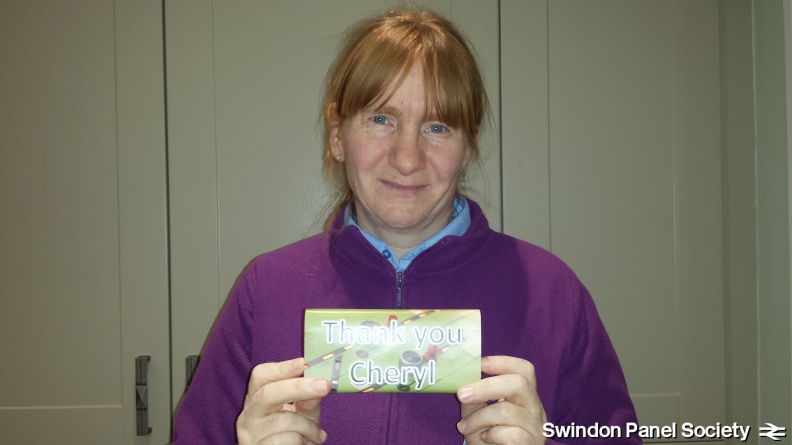