The Society is based within Didcot Railway Centre, the entrance to which is via Didcot Parkway railway station, Station Road, Didcot, Oxon. OX11 7NJ (Google Maps).

Didcot Parkway is well-served by trains operated by Great Western Railway. There is a good service from London Paddington, Oxford, and Bristol Temple Meads, Bristol Parkway and Swindon. When you arrive at Didcot Parkway, the entrance to the Railway Centre is from the station subway (opposite end to the ticket barriers). 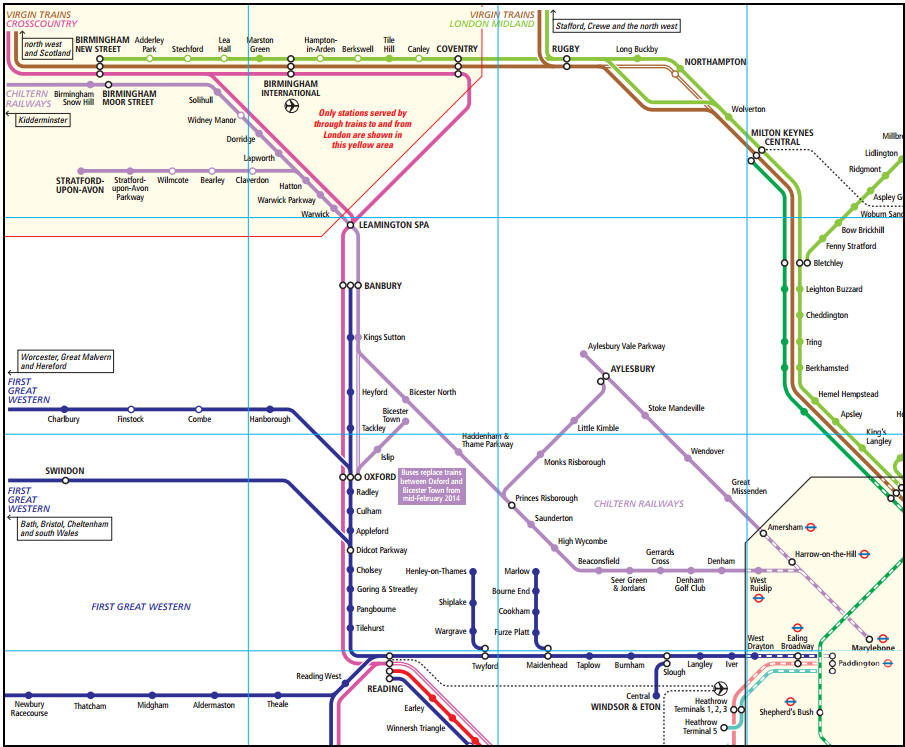 FROM LONDON, READING AND THE THAMES VALLEY

The journey time on a fast/semi-fast service from London Paddington is about 40 minutes. There is a regular pattern of weekday trains, with three trains every hour, but the weekend timetable is less regular, so check with National Rail Enquires or Great Western Railway before you travel.

From stations in the Thames Valley, such as in West London, Slough, Maidenhead, Reading, stopping trains operate from these stations half-hourly on weekdays and generally hourly on weekends. These are the trains that are bound for Oxford (or may be advertised as Radley). Again, sometimes alterations are made to accommodate maintenance work, so check before you travel.

FROM BRISTOL, BATH AND SWINDON

There are about 3 trains every two hours from each of the main Bristol Stations to Didcot Parkway on a weekday, with slightly fewer at weekends.

FROM OXFORD, BIRMINGHAM AND THE MIDLANDS

There are two CrossCountry trains per hour (one per hour on Sunday mornings) from Birmingham New Street, half of which call at Coventry, and all calling at Leamington Spa, Banbury and Oxford. Change at Oxford for a regular service to Didcot Parkway, approximately half-hourly in the week and hourly at weekends.

Didcot is easily accessible from the A34, which has links to a lot of other major roads.

From the east, south or west take the M4 to junction 13 (Newbury and Chieveley). Come off here and head north on the A34, signposted for Oxford. After about 13 miles (or about 12 minutes), take the junction off the A34 signposted for Didcot, Milton, Drayton, Steventon, A4130 and also the brown signs for Didcot Railway Centre.

Take the fourth exit off the A34 junction roundabout, towards Didcot A4130, and the brown signs to Didcot Railway Centre. Follow this road into Didcot. 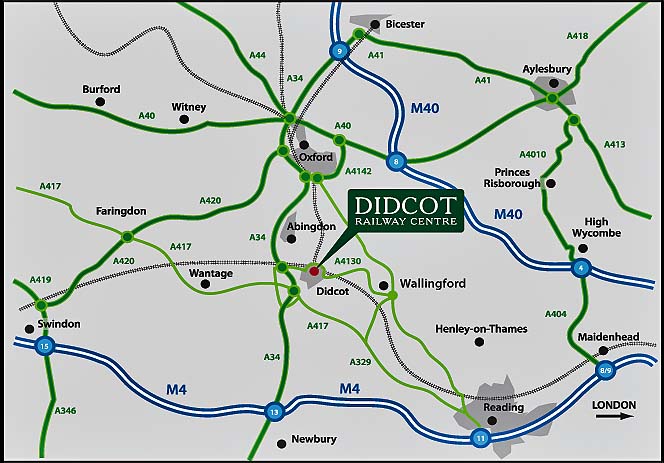 There are two car parks to choose from:

Following the brown-signs for Didcot Railway Centre will lead to the Didcot Parkway station car park (Foxhall Car Park, Basil Hill Road). This car park is run by APCOA on behalf of FGW. It has a large number of spaces and is open 24/7. The Railway Centre is about a 10 minute walk from this car park: A footbridge is provided over the railway in the east corner of the car park. Go over this footbridge and along the path to the railway station.

OR: follow the British Rail arrow signs to Didcot Parkway Station, and there are two large (inexpensive) car parks opposite the station, either side of the Prince of Wales public house. The station is less than a minute’s walk from this car park.

A number of local buses operated by various companies operate to and from Didcot Parkway railway station from the surround areas.

Long distance buses operated by National Express operate to Oxford bus station, from where it will be necessary to get a local bus or a train to Didcot Parkway.

3 thoughts on “How to Find Us”