We are delighted to have been donated a CAB RIDE by First Great Western!

We will be auctioning the cab ride through February to raise funds for the panel move.

Today, 23 January, marks the point four months out from Swindon Panel’s entry into preservation. The engineering possession that will see the closure of the panel is due to commence at 0115 on Saturday 23 May 2015.

Both for Network Rail and for Swindon Panel Society: There is lots of work to do!

From our point of view, we will shortly be engaging more firmly with our contractors and suppliers in planning for the move of the panel from Swindon to Didcot, which we hope will take place approximately six to eight weeks after closure (so mid-late July).

A small taste of the packages of work we have ahead of us:
* It is necessary for us to further engage with Network Rail regarding the method of extraction and protection of NR’s interests.
We need to arrange and contract:
* a scaffolding cradle system for the safe and secure lifting of the panel
* a method of skating the panel out onto the flat roof of the relay room
* lifting contractors for the movement from the roof to a flatbed for transport
* transport for the movement to Didcot
* rail movement into the Railway Centre
* lifting within the Railway Centre to its ‘summer house’ holding location
* movement into the new building in the autumn.

All but the very last of those needs to be arranged, timed and co-ordinated very tightly so as to ensure each part of the jigsaw fits in as required.

We are very grateful to a number of individuals and companies for their offers of help, and will be meeting with a number of those over the coming weeks. One aspect we have not had any corporate interest is in the scaffolding/lifting cradle aspect. If you or someone you know is in this field of work and may be interested in helping us out, please let us know!

We will, of course, continue to publish news stories on this site of developments as this exciting phase of our project develops!

There were two groups on the site: the GWS Civil Engineering Group concentrating on tree branch felling and pruning in the area of the branch line, where the large wooden gate is at the line connecting the branch line to the rest of the site; and a small group (of three) working on constructing the reinforced cages for the foundations of the site. 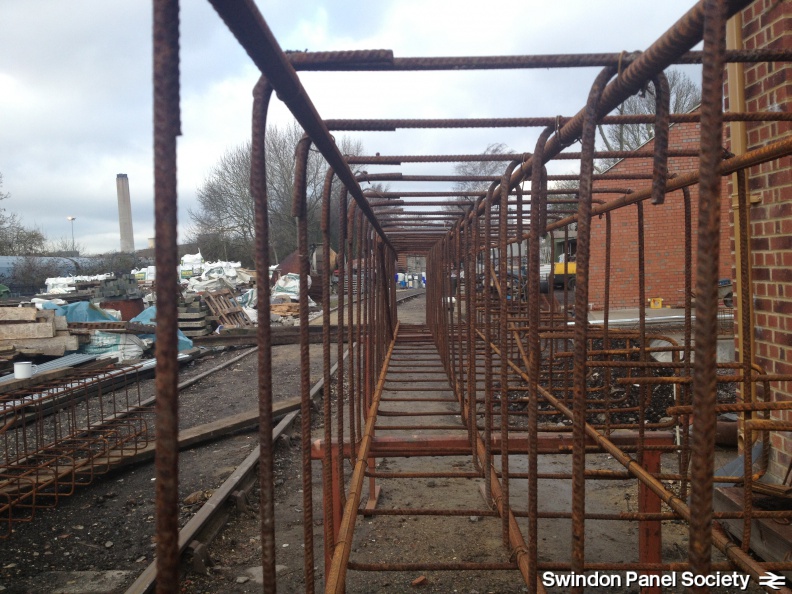 Thirteen such cages are required (in various combinations of design), and we completed the eleventh and twelfth.

The eleventh was slightly more complex as it has a ‘boot’ sticking out the bottom. This boot runs around the outside edge of the foundation, and is the bed on which the first brick course will be laid.

All the re-bar cages start as individual round bars about 5 metres long, square hoops and U-shape hoops, and small straight pieces about 18 inches long with a hook on each end. They are constructed by laying three 5-metre round bars horizontally across two tressles and suspending about 15 square hoops vertically from them. The square hoops are spaced at 200mm centres and two of the round bars are attached to the inside corners all the way along using lengths of wire about 6 inches long and a hand-held tool for twisting the wire tight. The third round bar is attached in the same way to the mid-point of the top side of the square hoops.

Two bars are then fastened inside the cage diagonally to hold the arrangment square. Hooked, straight pieces of bar are then inserted vertically through the cage from the middle long bar on the top to the bottom, and, again, fastened in place. This provides strength through the cage. 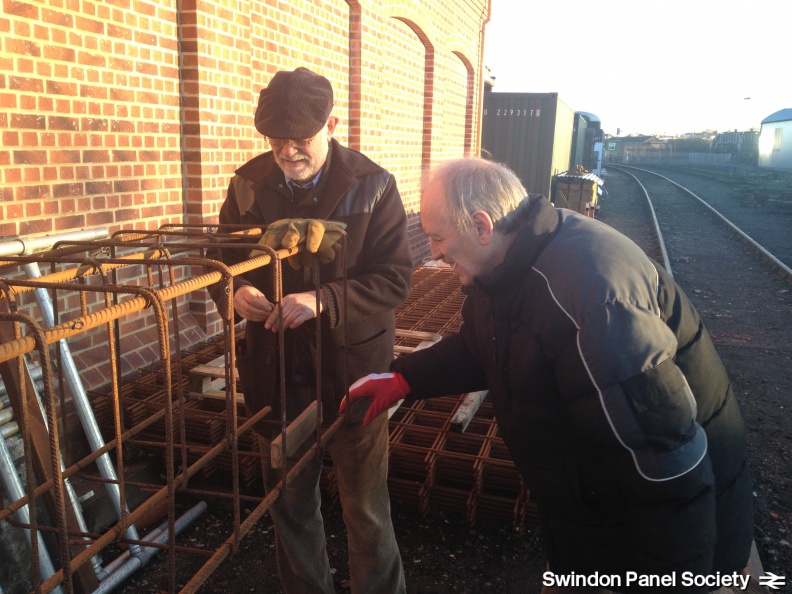 Where required, U-shape hoops are then added, protruding outside the cage, to make the ‘boot’ round the bottom of the foundation. These are the fastened to the cage co-incident with the square hoops.

Each cage takes about 140 fastenings, plus an additional 90 if a boot is required. It’s not difficult work, and we found that once we had go into a rhythm we worked quite quickly and efficiently.

Unfortunately our camera batteries ran out half way through making a video this week, so there is only half a video to show you!

Today, a few days later, (Wednesday) the second of six sections of the foundation were poured with concrete. This section is the front left corner of the building (as you stand in it looking towards the front doors and engine shed), and will be the first part of the “Bristol Room” that visitors will arrive in when they first enter the building. 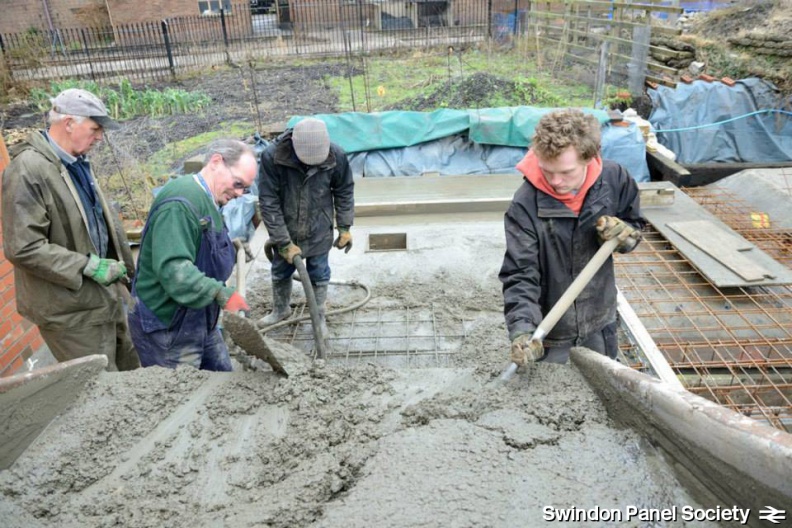 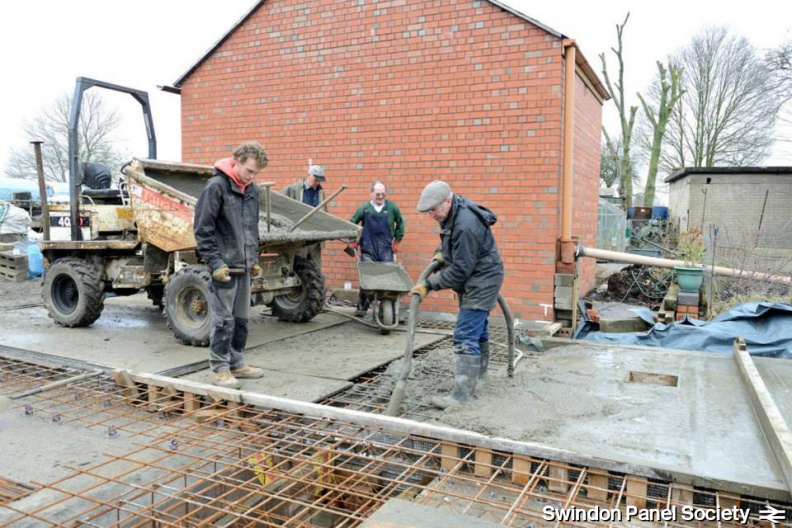 More pictures from this week: http://photos.swindonpanel.org.uk/index.php?/category/95

Swindon Panel days are twice a month (one Saturday and one Sunday), a full calendar of dates is available on our Activities page. We are currently concentrating on assisting with the building works wherever we can. New faces are always welcome (as well as old ones!) so come along and say hello if you can.

As previously show in our previous news story, we are hoping to bring together as many past and present Swindon Panel-linked staff as we can for our Past, Present and Future gathering on 25th April.

We believe we have a comprehensive list of signalmen based at Swindon since 1968 (although we’re happy to be corrected!), and we are now trying to contact as many of them as possible. Of course our interest is not limited to signalmen/signallers, we would be delighted to make contact with S&T and other staff as well! Unfortunately we have very little indeed in terms of records for other than signalmen.

If you are in contact with any of staff members below that we aren’t (ie, those not highlighted), or any other staff linked to Swindon panel that we haven’t listed then please do get in touch, or give them our contact details. We would love to invite them to our gathering in April.

Swindon Panel Society is delighted to be hosting a ‘Past, Present and Future’ event on Saturday 25 April, and you’re invited!

We look forward to welcoming as many Swindon signalmen from the past and present as we can; those involved in the present preservation effort; and those with an interest in keeping Swindon Panel alive in the future. If you are one of any of the above, please come and join us!

There will be a display of old Swindon Panel photos and artefacts, as well as light refreshments. There will also, of course, be plenty of opportunity to catch up with former colleagues and chat about what people have been up to since you last saw them and what the railway has been up to (lots!), and the plans for the preservation.

Everyone is invited, and we are particularly keen to extend our invite to as many present and former Swindon signalmen / signallers, S&T staff, inspectors, and those who had a personal involvement with Swindon Panel as we can. So if you are one of any of the above, please do come and join us. Or if you are in contact with a former Swindon person, please do let us or them know about this gathering!

(It would be helpful if you could advise us of your intention to join us so that we may plan/cater accordingly.)

Can you help us trace others who have worked in the panel…?

Well done to those who braved some chilly and damp weather to join in the New Year Brick Cutting Party at Didcot Railway Centre!

The Civil Engineering Group met every day from 31 December to 4 January, joined by Swindon Panel members on 1 and 3 January.

The bricks for the new building were delivered to DRC some while ago and are stacked up near the Wantage Road bus garage. The new building will be built of bricks in an English Bond pattern, which requires a large proportion of half-bricks. So over the new year period the working groups set to work with a brick guillotine, and started nibbling away at the pallets of bricks. 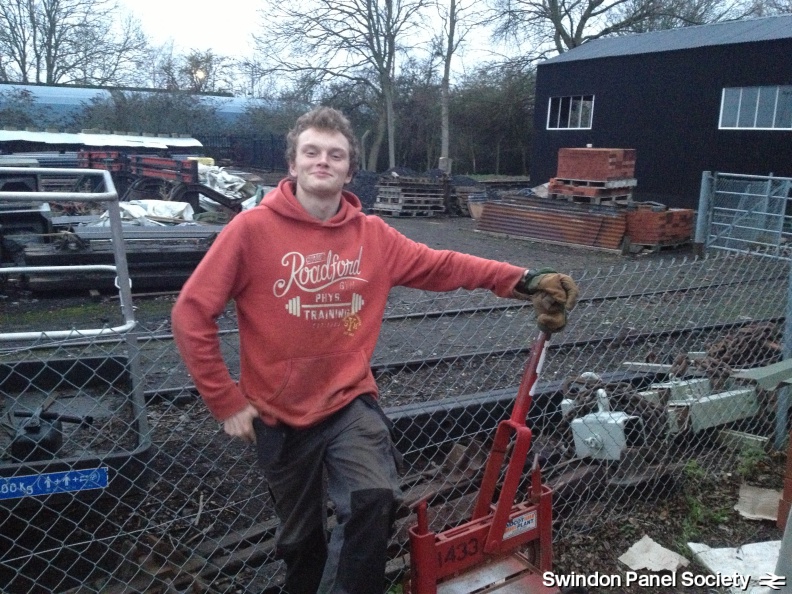 We found the ideal number of people to work with the machine was three or four, in order to get a good production line, but without getting in each others way. One person inserting bricks into the machine and removing the halves, one person operating the machine handle, and one or two people stacking the half-bricks. The half-bricks produced create quite a volume, so efficient stacking onto pallets is important, as the pallets will be lifted by the steam crane to the building site, so it’s no good if they all fall off as soon as the pallet is lifted! 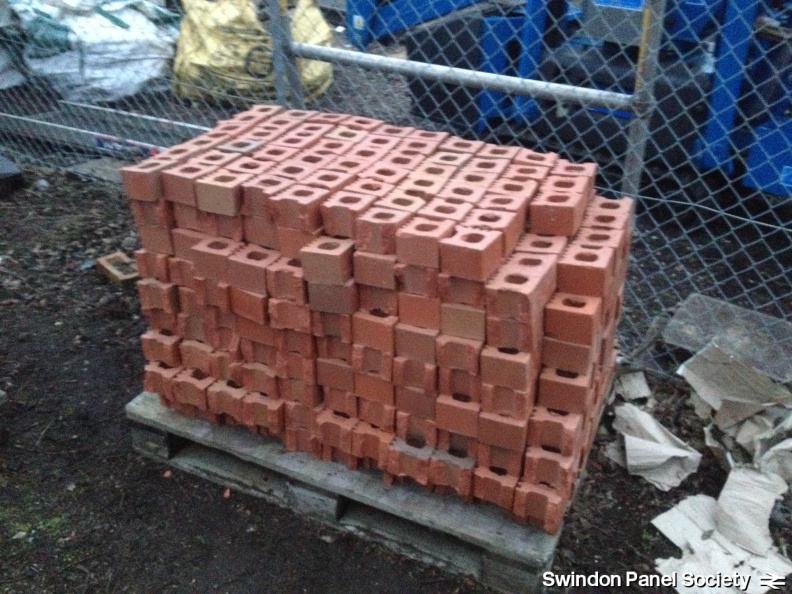 One of seven pallets of cut-up bricks.

The required size of brick is slightly less than half, so each brick required at least two cuts, the narrow middle portion being rejected (although these will later be used in other building works as hard-core). Some bricks required an extra cut as a ‘trim’, if one of the first cuts wasn’t straight.

The guillotine is a clever machine that exerts about three feet of mechanical advantage in the handle into a movement of the ‘blade’ of about 1/4 inch. The blade doesn’t cut all the way through the brick, it just cracks it from the top. This, combined with the specially-shaped plate on which the brick rests gives very good results, and by the end of the sessions we had a frequency of about one brick every 5 seconds.

The morning of New Year’s Day was quite wet, and progress was hard during that time. The team fashioned a roof over their area out of corrugated sheeting! The afternoon was dry and cool, which was ideal weather for the work we were doing. We soon built up speed (and sweat), and were so enthused that we carried on well after dark (the normal natural stopping time), until about 5.30. We set ourselves several targets (end of this pallet, etc), but each time we reached the target we still wanted to carry on! 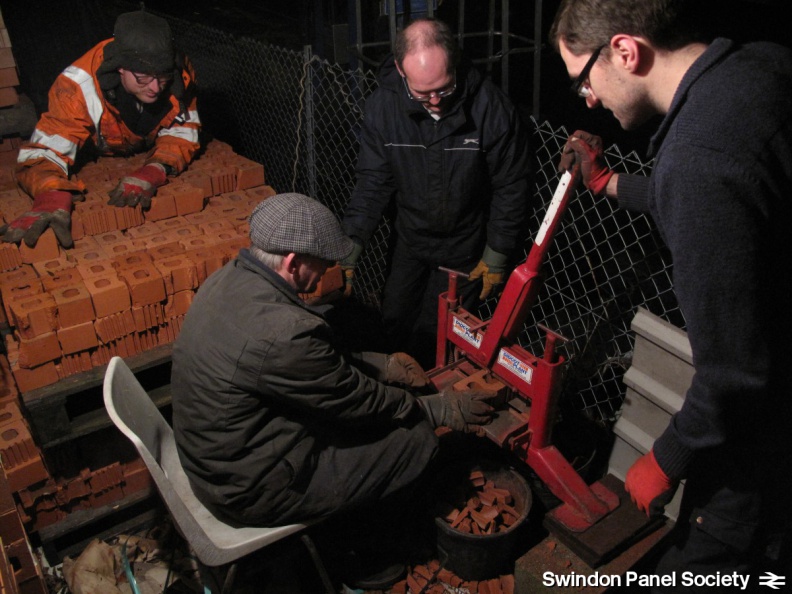 The days were very enjoyable indeed. The work isn’t massively hard, and doesn’t require much in the way of technical skill, it is just jobs like brick-cutting that need to be done, and we can achieve as volunteers, to minimise the overall cost of the building.

We cut 2256 bricks into 4512 halves. Just over 7800 halves are required, so about another 1250 bricks to cut, which we hope to complete in the CE Day on Saturday 17 January and the Swindon Panel Day on Sunday 18 January. Please do come and give us a hand if you can! (If you are planning to join us please let us know in advance if you can, as if there are sufficient helpers we may be able to secure a second guillotine.)