Farewell this weekend, as we start to say good bye to one of Swindon Panel’s neighbours – the first part of the Stoke Panel in Bristol PSB has been decommissioned and is being recontrolled to TVSC.

The lines moved are those that were commissioned under stage 7B of the Bristol MAS scheme on 22 February 1971: Winterbourne to Patchway, Filton Jn and Hallen Marsh. It replaced the boxes at Filton Junction, Filton West, Stoke Gifford East, Stoke Gifford West, Patchway and Cattybrook.

The map of Stage 7B of the Bristol MAS scheme in 1971. Click for a larger version.

Bristol Stoke will still control, for the time being, the Charfield lines to the fringe with Gloucester and the Badminton lines fringed by TVSC on both sides (in the east where it used to fringe with Swindon PSB.) This area would have been decommissioned some time ago, but was delayed by the delays to the closure of Swindon PSB. 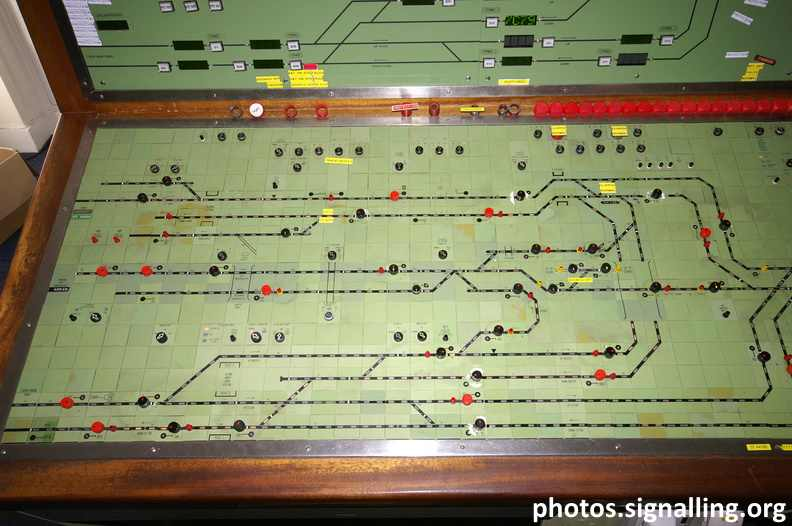 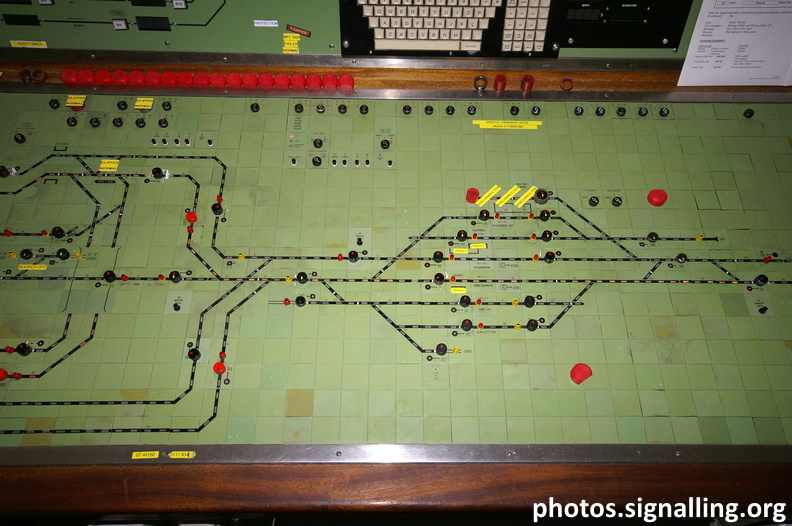 The photos above show two parts of Bristol Stoke Panel in 2007.

When the Bristol MAS scheme was started in 1970 BR proudly launched a large public awareness campaign called “Starting Something Big at Bristol”, with large banners at the front of Temple Meads station. Bristol was the largest panel box Western Region had ever installed, they were proud of it, and wanted everyone to know.

The campaign distributed information to the public about the scheme and how it would improve the management of rail traffic, and managed their expectations about the necessary service alterations that would take place during the process. Open meetings were held for the railwaymen and women of the time to attend and raise questions etc about the scheme. As with all large-scale industrial changes such as this there was some considerable upheaval for the staff concerned, not unlike the present-day scheme. One of the then-signalmen, Peter Randall, wrote an excellent contemporaneous book about the resignalling and the social and operational impact that shared the name “Starting Something Big at Bristol”.

The current resignalling, slightly less proudly called “BASRE” (Bristol Area Signalling Renewals and Enhancements), is driven by three main factors: life-expiry of the 1971 equipment, the requirement for AC-immune signalling in readiness for electrification, and the re-four-tracking of Filton Bank to deliver capacity enhancements. The scheme, which includes Bristol Temple Meads and everything north and east thereof, will require over 700 signalling equivalent units (SEUs). A large number of WR MAS gantries and cantilevers will be replaced, connections to a new IEP depot at Stoke Gifford will be commissioned, and the St Andrew’s Crosses at Temple Meads with mid-platform signals, and of course all the WR E10k electro-mechanical relay interlockings will be replaced with solid-state interlockings, relocked and recontrolled to TVSC under the ‘85% compliance approach’ which means existing signal positions remain largely unchanged.

If you have memories of working in Bristol Panel or on the Bristol area, or photos from the panel, especially in its early days, please do share them with us in the comments below.

The photo below shows Swindon Panel’s fringe to Bristol Stoke. 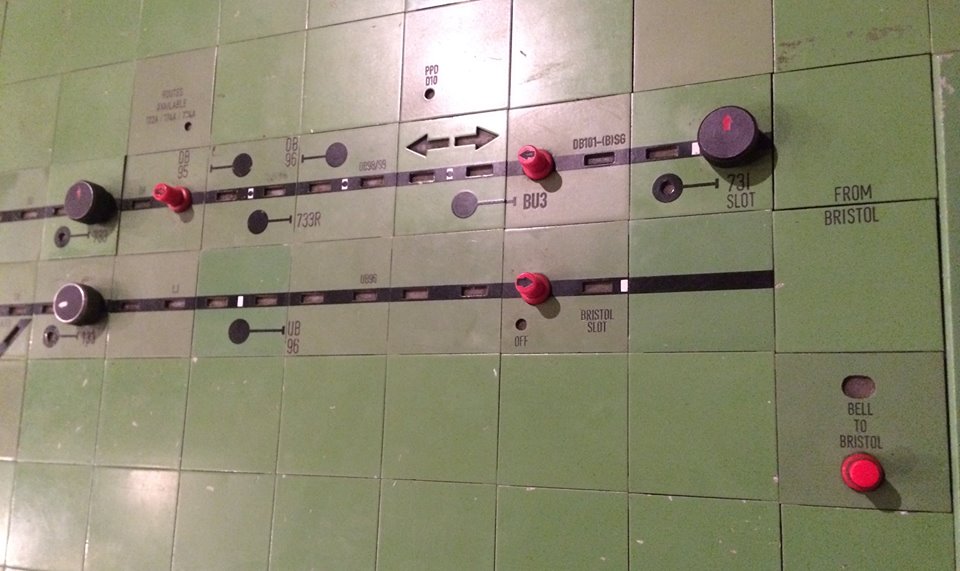 Are you good at soldering? If so, and you’d be prepared to do a bit of soldering at home for us, Swindon Panel wants to hear from you!

Our new simulator, which has been under research and development for the last two years, requires a lot of PCBs to interface it with the panel (approx 350). These have been designed in-house and produced, and all the components have been delivered. All we need now is for the components to be soldered on.

If you are good at soldering and would be happy to have some boards and components posted to you for you to solder up at home and send back to us, we would love to hear from you.

It’s not even necessary for you to travel to Didcot to be involved in SPS!

There are also written step-by-step sheets.

If you would like to help please let us know by reply, or any of the other usual communications channels, and please give us an indication of your soldering confidence or skill level.

When we have a group of helpers ready to solder we will initially send you one input board (blue) and components. This is the simplest of the three boards, and we will ask you to solder them up as per the instructions and send it back to us. This is to check that the instructions are correctly understood and avoid wastage from producing many boards incorrectly due to any misunderstanding in the instructions.

Once this initial board is confirmed as correct we will send you a batch of boards and components. After you’ve done one you’ll be able to give us an indication of how many you’d like to receive in a first batch.

Once you’ve soldered up the batch, you can send them back to us at Didcot and we will insert them into the panel.

We hope you will not mind being asked to complete one board as a demo. We felt this was necessary as the boards are expensive to produce, and we don’t want to see a batch wasted due to any misunderstanding of the instructions. 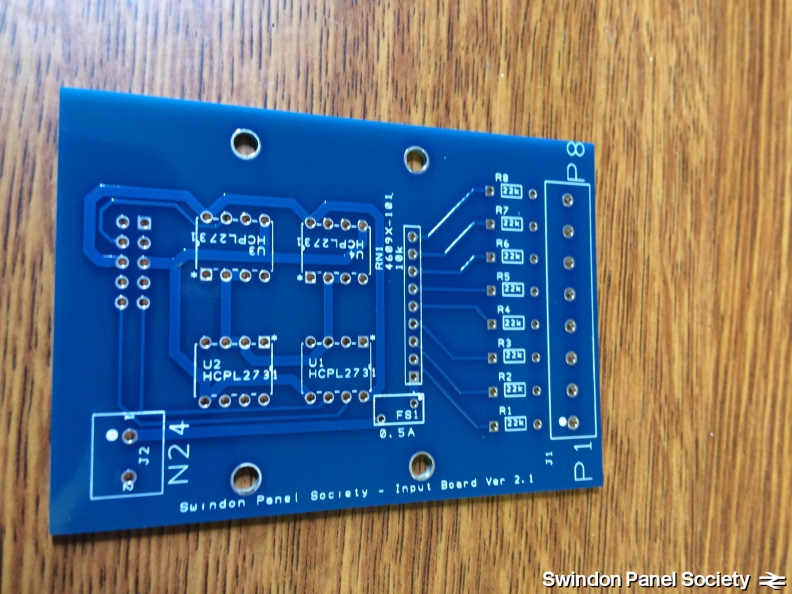 Thank you to everyone who joined in with work week at Swindon Panel last week.

Some great progress was made by the Panel Society and the Great Western Society Civil Engineering (CE) Group. 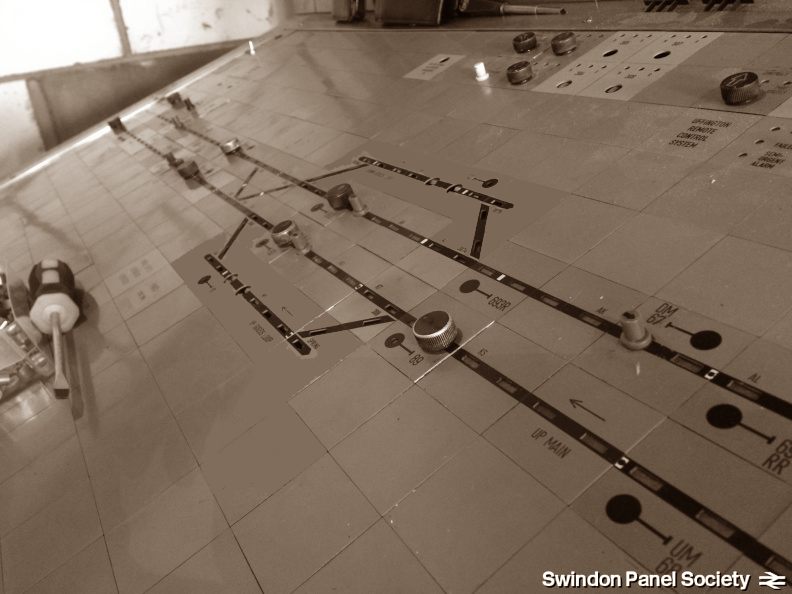 Uffington Loops were the only point of refuge between Highworth Junction and Steventon after the line between Challow and Wantage Road was de-quadrupled and Marston Crossing loops were closed in the 1960s.

The loops were removed in the early 1990s when Challow-Wantage was re-quadrupled in response to the increase in coal traffic between Avonmouth and Didcot Power Station.

Considerable effort was required to reinstate the loops in the preserved Swindon Panel as the surrounding tiles had been moved around considerably. 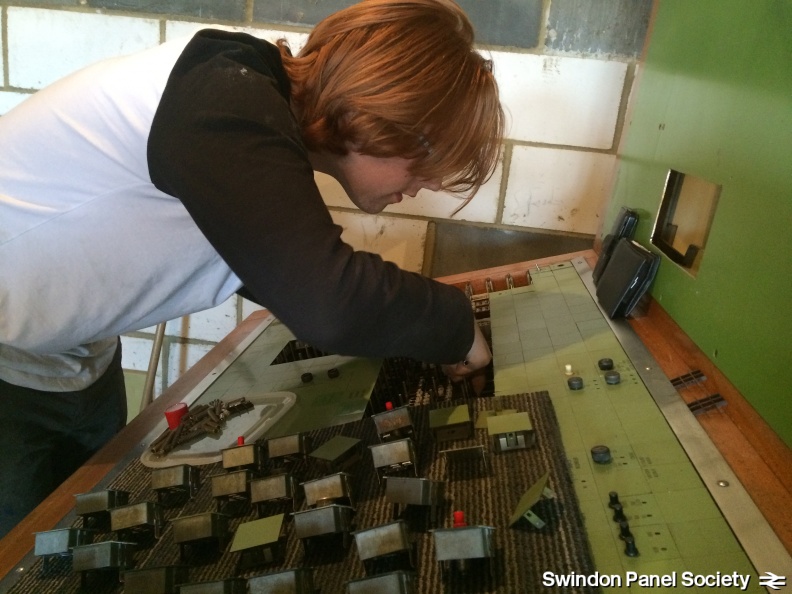 The red team installed the new panel top plates that had been delivered from Henry Williams to help up return the panel to its 1980s state. This also required the configuration of numerous mechanisms (the metal housing underneath the tile, below left) and bases (the electrical terminals in the panel, below right) built up from spares. 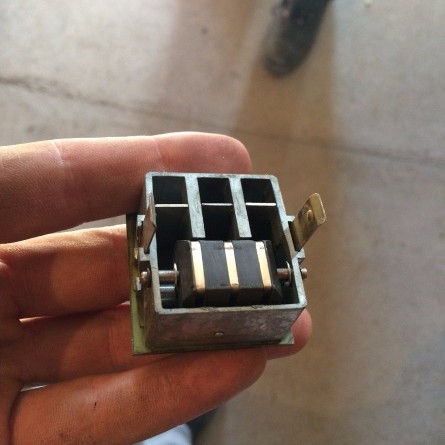 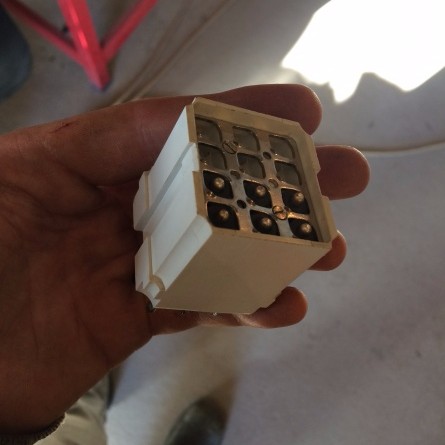 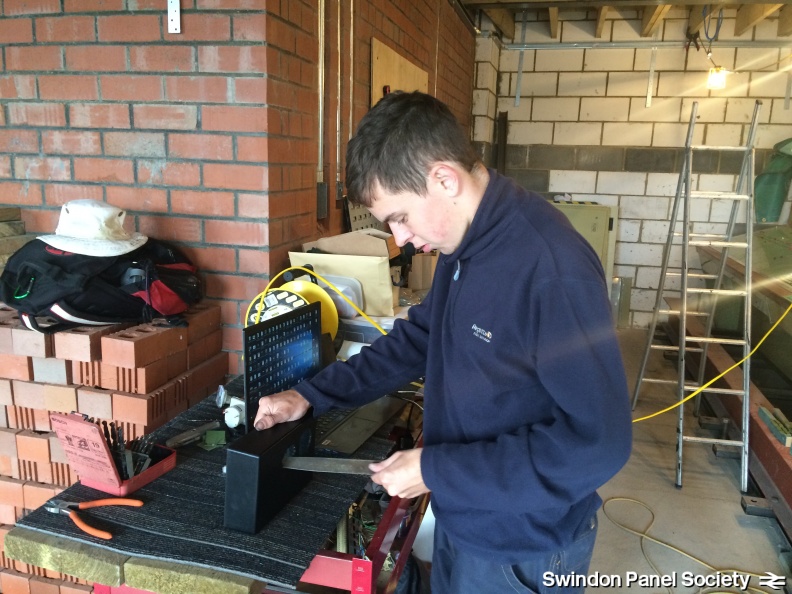 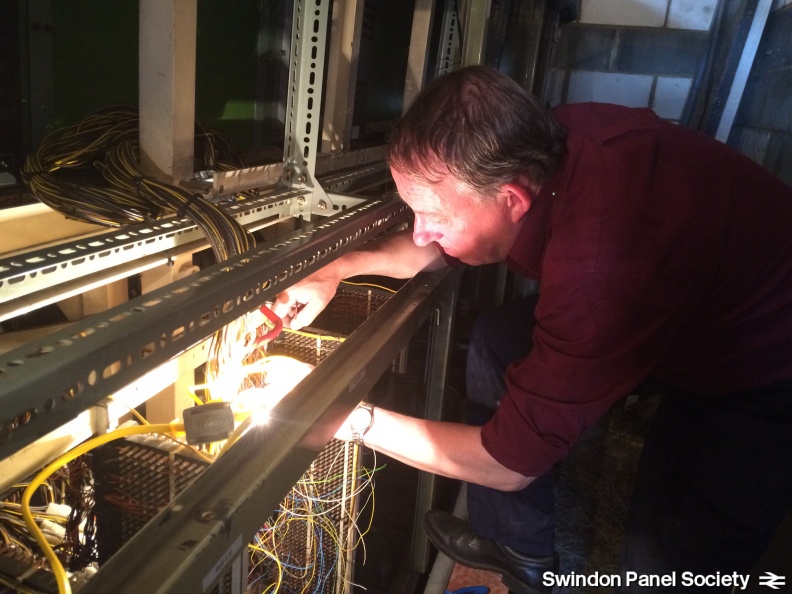 The last of the wiring that linked the tag blocks to the relay room at Swindon has now been removed (hurrah!). There is some further tidying up to do, and then….. yes, for every wire we removed we have to solder a new one back on! 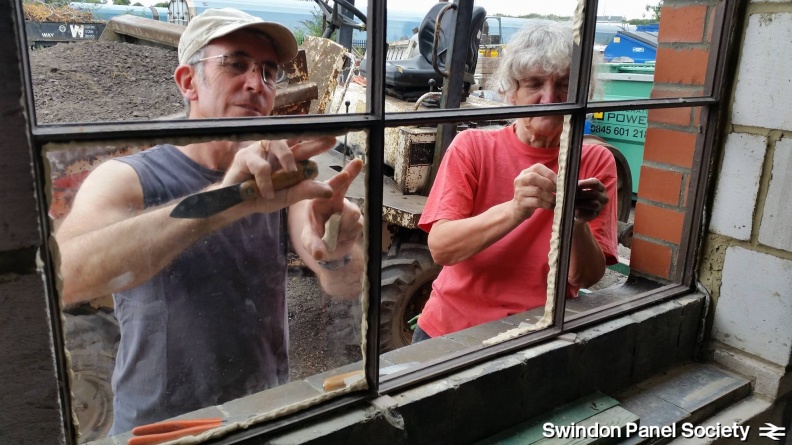 The glazing has started to be installed in the reclaimed cast windows. There are 12 panes required in each of the 4 main windows, plus a couple of smaller ones. Each has to be individually installed and puttied into place. 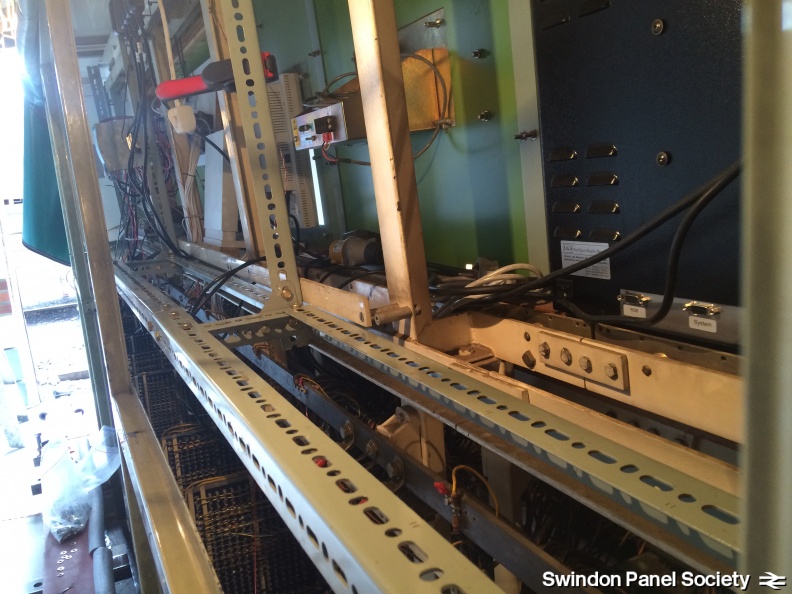 A considerable construction of ‘Dexion’-style slotted racking has been installed in the back of the panel. This is to support the extensive microelectronic simulator that will be installed in the back of the panel. The panel simulator power supplies have started to be installed and wired in. Here is the main power area (‘bay 0’). There will be 8 other ‘bays’ of simulator equipment stretching the entire length of the panel.
In addition, the simulator room has started to be built. This is a small room in the Bristol Room where all our computer equipment will live, and the simulator operator will sit (when required).

Also, the GWS S&T Dept, who are the main leaders in the installation of signalling exhibits in the Bristol and Brunel Rooms have started to make great progress in starting to shape the display areas etc in this part of the building.

More photos from 2016 Work Week 1 are available in our Photo Gallery.

Work Week Part 2 is Saturday 20 to Monday 30 August… and you can be involved!

Work week is a great time for a concerted effort of progress on the panel – it feels really great to be part of the team and see progress being made!

Tasks for Work Week 2 include:

– “The Prod Test” – attaching a prong to each of the tags in the back of the panel and confirming that the correct lamps on the front illuminate in the correct combination. This is important in order to identify any irregularities or inconsistencies in the panel wiring, and also to confirm our alterations have been successful, before they panel is connected to the delicate simulator electronics.

– Panel Domino Construction – Continuing with the task of reconfiguring and compiling new bases and mechanisms that the panel requires to work (second half of the week).

– DIN Rail Installation – The back of the panel is now fitted with racking ready to accept DIN rails. 7 bays of 5 DIN rails are required, which will then require clips attached for 10 PCBs to live on each one. Yes – 350 PCBs! Once the clips are in, it’s time to chase cables from the future position of each PCB to its appropriate tag block.

– Tag Looping Alterations – Some alterations are required to the orange ‘looping’ on the tag blocks. This is because our simulator will be wired slightly differently to how the real interlocking was (but will work in exactly the same way).

– Component packaging and/or soldering – The many thousands of components for the simulator require sorting and packaging up for sending out to the soldering army…… more about that later!

– Window glazing fitting and door frame carpentry – If you fancy something a bit more heavy-duty, the CE group will be continuing their work of installing the windows and doors on the building.

As you can see there is plenty to do, hopefully something for all tastes. The Railway Centre will also be open and is fascinating to look round.

So if you have a spare day or two, come and join us and help bring the completion of the preservation of your favourite panel a little bit closer!

Network Rail employees…. remember, you can get paid by NR for volunteering with Swindon Panel! Read more….