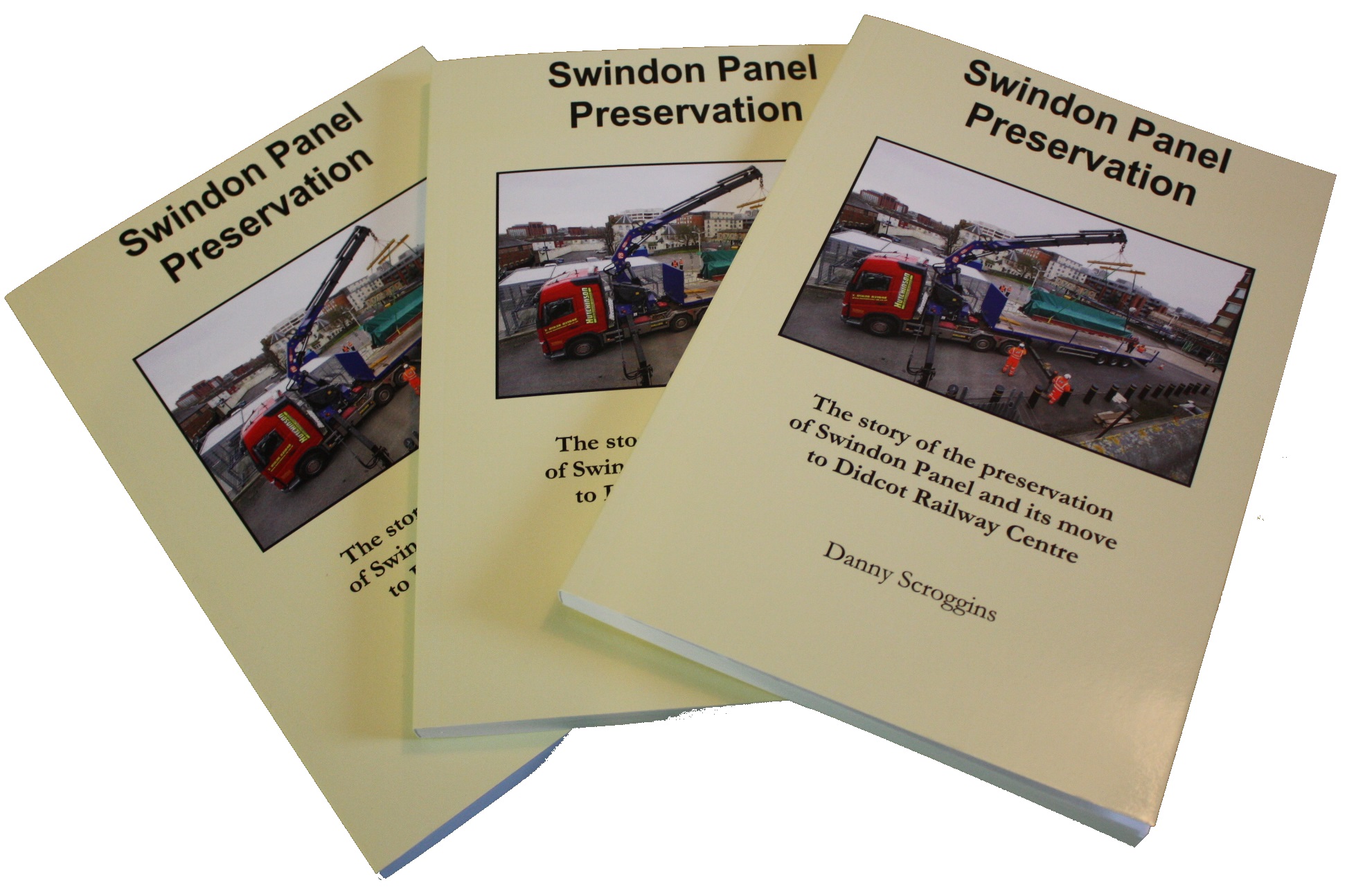 SWINDON PANEL PRESERVATION – The story of the preservation of Swindon Panel and its move to Didcot Railway Centre.

Official launch on Saturday at the Welcome to Didcot day, or pre-order your copy now at https://www.heritage-ops.org.uk/product/245/

All funds used in the preservation of Swindon Panel and our new task of bringing it back to life! 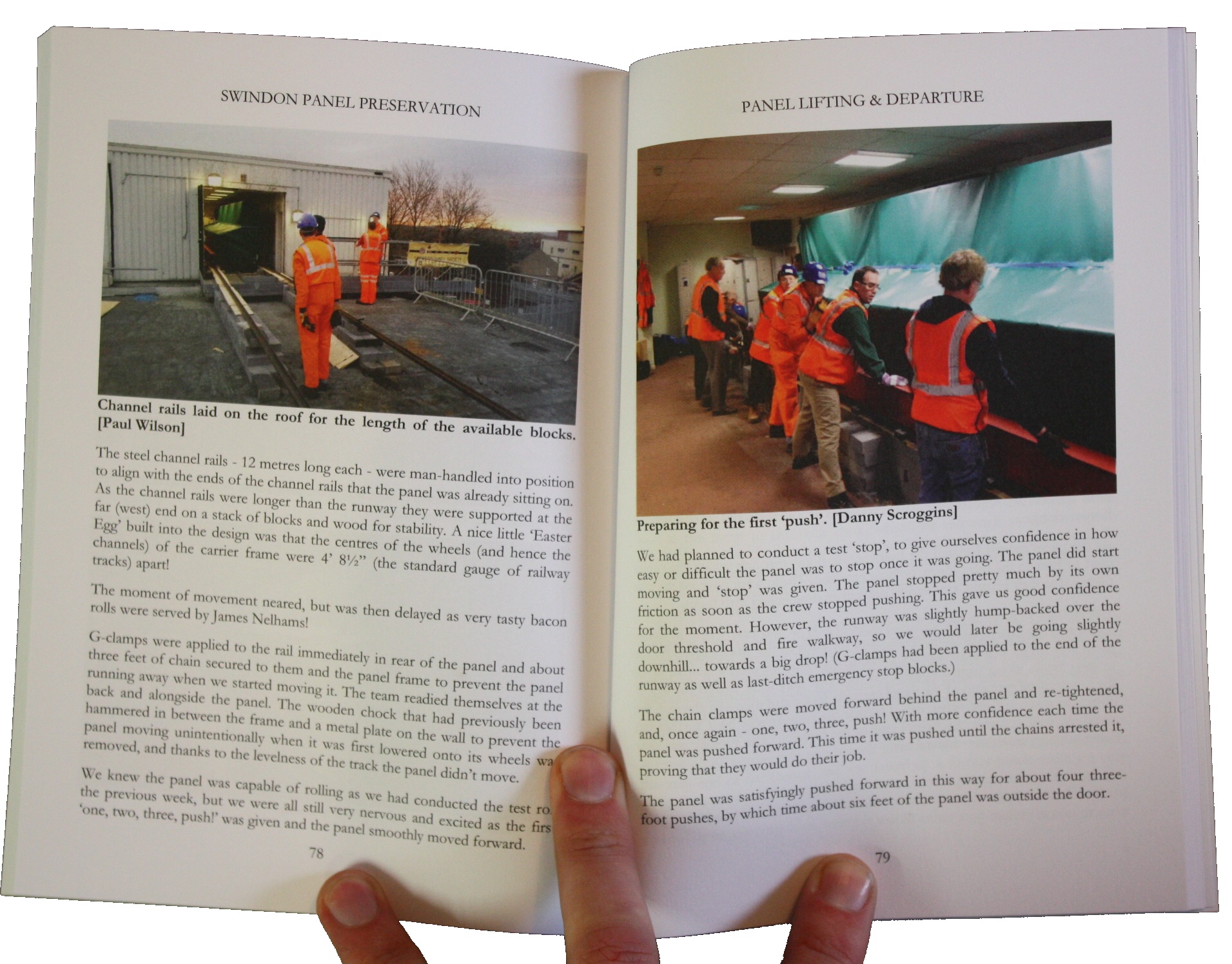 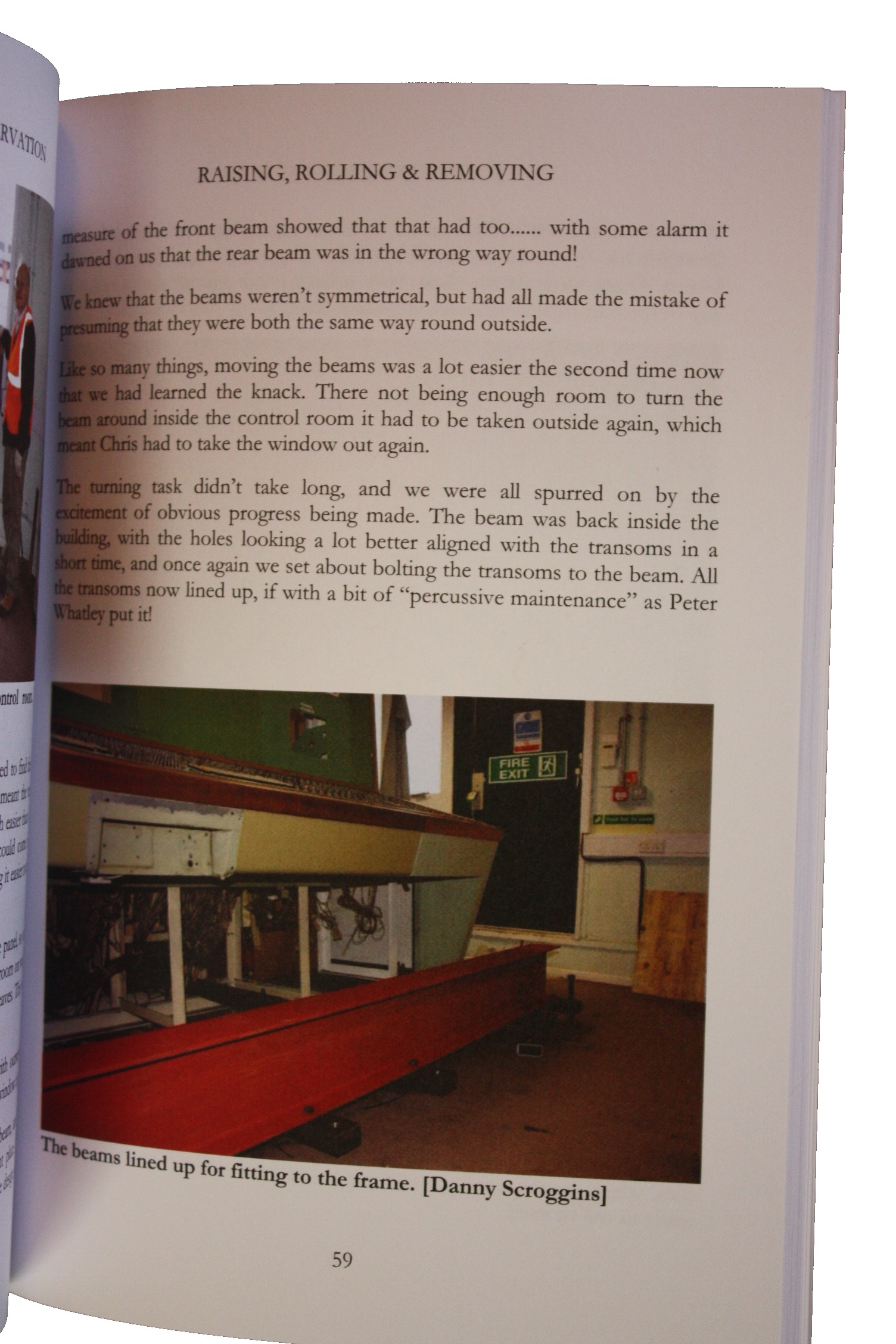 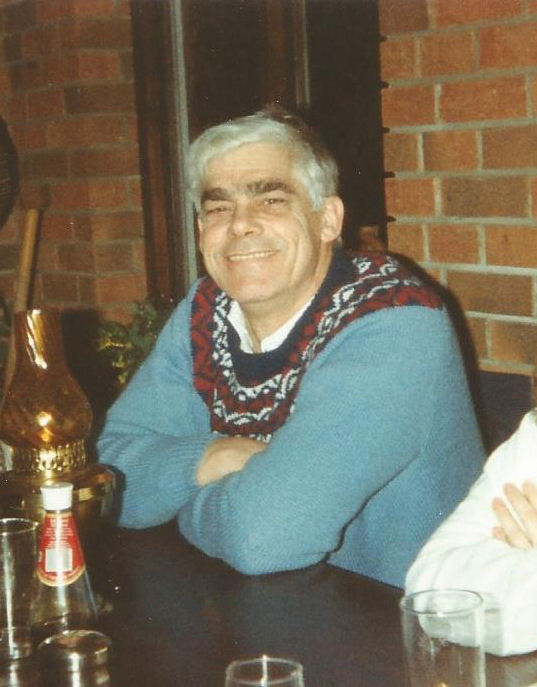 It is with great sadness that we report on the passing away of another member of Swindon Panel staff, Dave Cohen.

Dave previously worked in Gloucester S&T and moved to Swindon Panel S&T in 1976. He stayed at Swindon until the early 1990s, after which he went on to work for Racal (railway telephone providers) laying fibre-optic cables along side the track. During his time at Swindon he would have been heavily involved in the maintenance of the panel and the signalling equipment on the Swindon district.

Dave’s son Richard sometimes visited his father at work, and has many fond memories of being taken into Swindon Panel. He describes “Going upstairs to watch the lights moving along the panel and then peering out the window to watch the train pass through the station, or downstairs peering in wonder at the huge room of relays and circuitry or the rest room with the mixed smell of oil, tea and sandwiches.”

Unfortunately Dave passed away last week. Richard is trying to seek his father’s workmates who might still be either working or retired locally to advise them that Dave’s funeral will be held on 5 May at 12 noon at Swindon’s Kingsdown Crematorium, followed by a wake at Wootton Bassett Rugby Club at Ballards Ash.

If anyone wishes to contact Richard please let us know and we will put you through.

Our deepest sympathy is with Dave’s family at this very difficult time.

As we celebrate the arrival of Swindon Panel in Didcot, we also remember the contributions made to the life of the panel by the signalmen and women who operated and maintained it. One such person is Colin Baldwin, who unfortunately passed away recently.

Those who knew him may be interested to know the following: 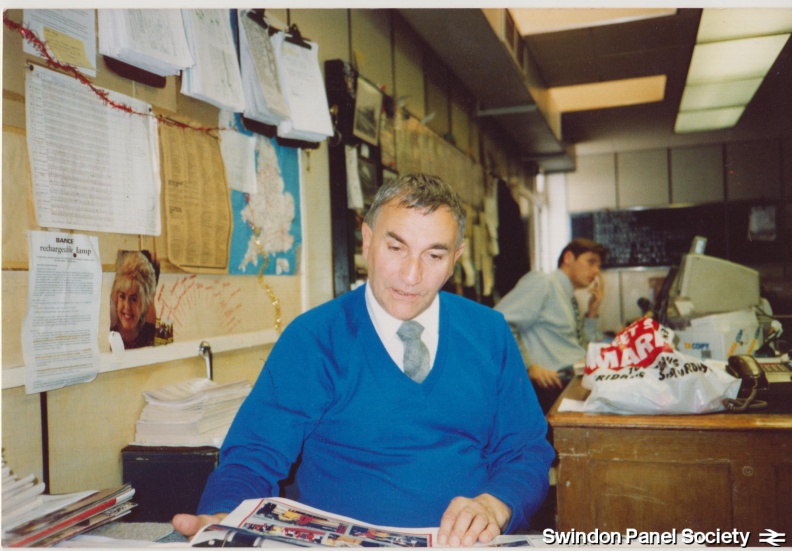 The panel has now been moved into its new building and its new permanent home.

The roof of the building was finished earlier this week – just in time!

The panel was lifted in by the Great Western Society’s steam crane. 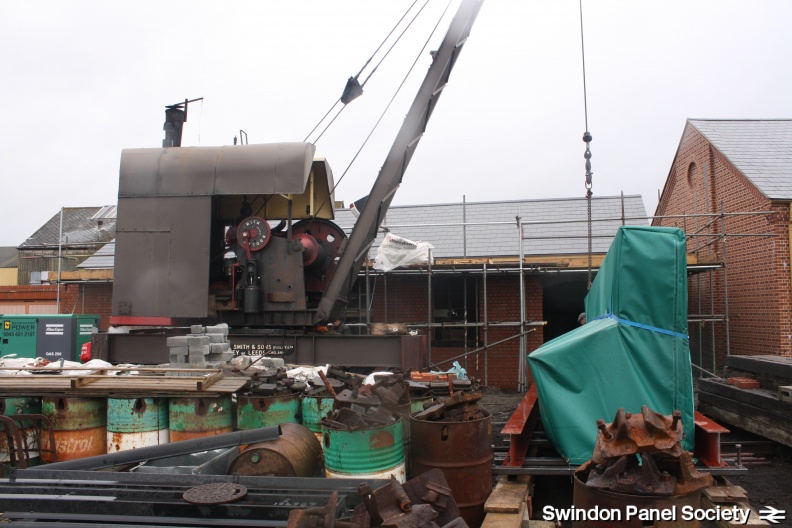 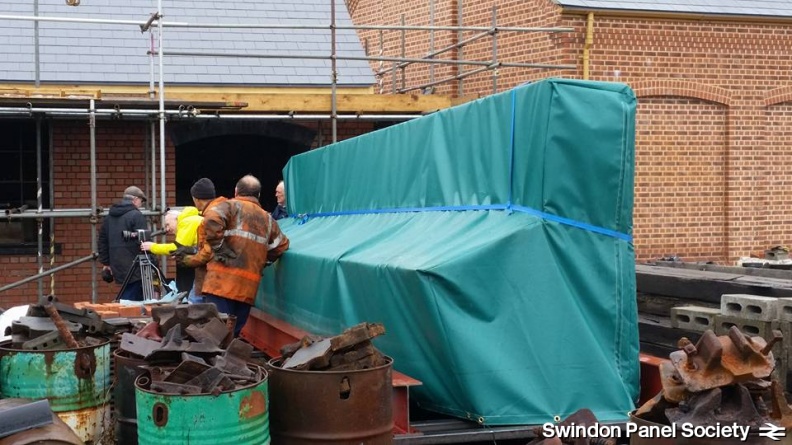 Thank you very much to everyone who has helped over the last week, the last month at Swindon and the last several years of the project – we’re home and dry… ish! The building doesn’t have any doors or windows yet so there is still a little way to go!

We will be at Didcot tomorrow (Friday 8 April), Saturday (9th) and Sunday (10th) – come and join in if you want to be part of the action!

We also hope to see you on Saturday 30th April for our ‘Welcome to Didcot’! 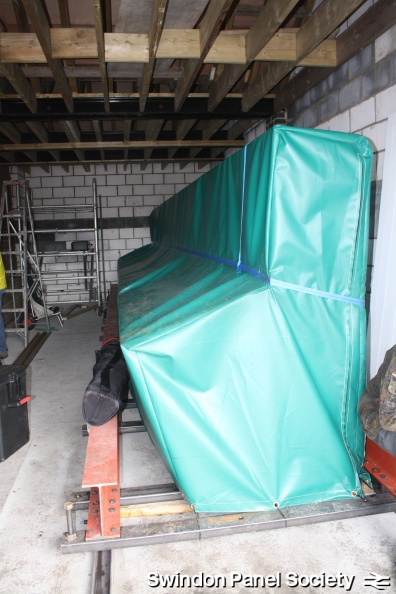 The Panel Preservation Movement is Born!

This morning there were no large-scale preserved panels. This evening there is one.

Thanks to an excellent turnout of SPS and GWS volunteers and P&D Specialist Services at Swindon Panel today, the culmination of two years’ careful planning and preparation since the project was first formed over three years ago, the panel was successfully extracted from the building at last!

The team assembled at Swindon Panel at 6am to start the roll-out of the panel. The panel had been raised up to the appropriate height and position on previous weekends, and the runway out onto the roof had been prepared on Friday.

Lots of checks took place on the frame and panel to ensure it was ready for departure. The wooden boarding that had temporarily replaced the end window and door was removed and steel channel rails laid out of the control room onto the roof. In small steps the panel was pushed out onto the roof by SPS volunteers. 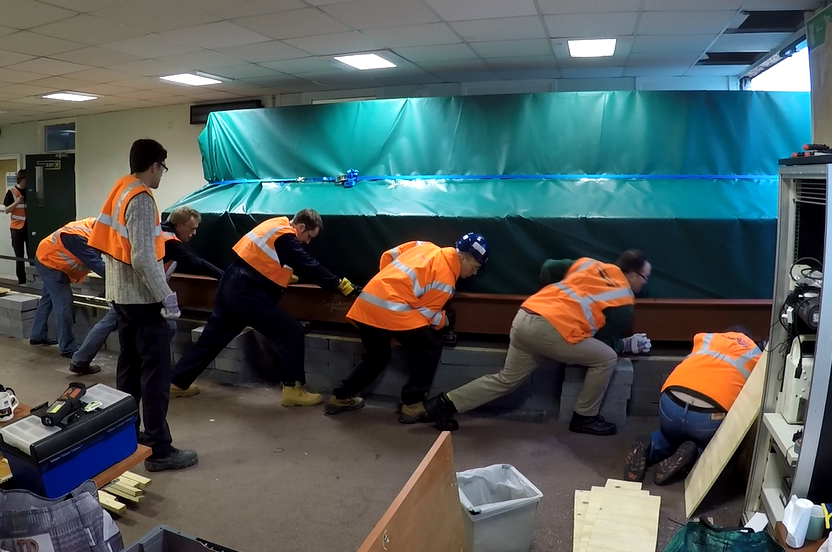 By 8am the panel was positioned outside on the roof, and was ready for collection. 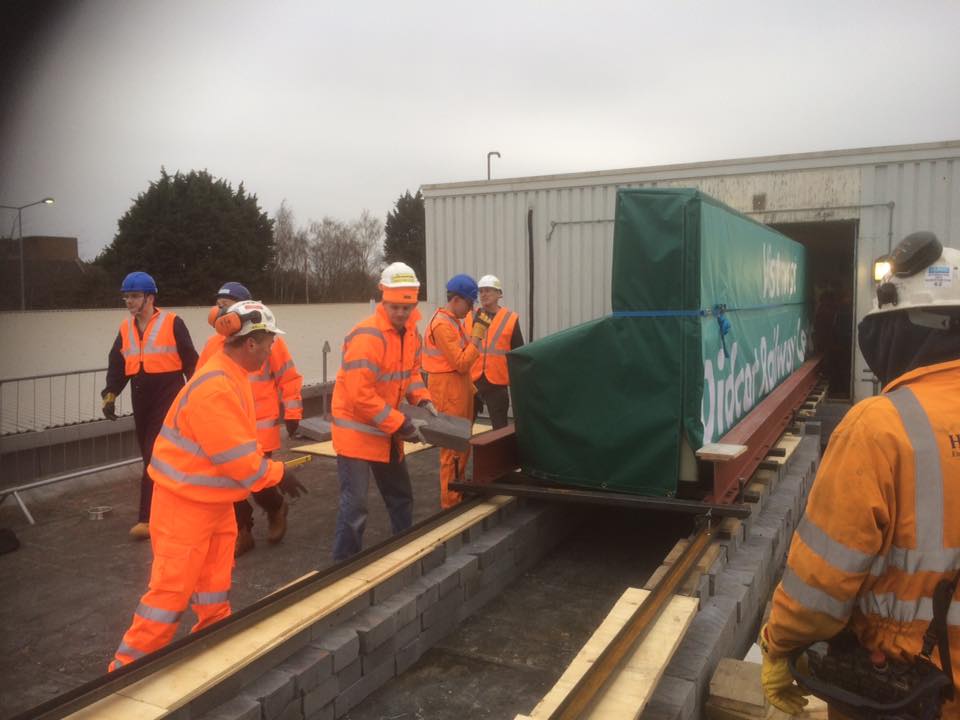 Meanwhile an enormous lorry and hi-ab had arrived outside the building (much to the concern of the driver, given the access available!).

Shortly after 8am, right on time, the lifting harnesses were applied to the frame and, after more checks, the hi-ab took the strain and whole panel was inched off the roof. Once confident, the panel was lifted over the barriers that were around the edge of the roof and down onto the trailer. It was a momentous occasion for all those present and everyone in the Society following on Facebook, Twitter, etc, that the day we had waited so long for had finally arrived! 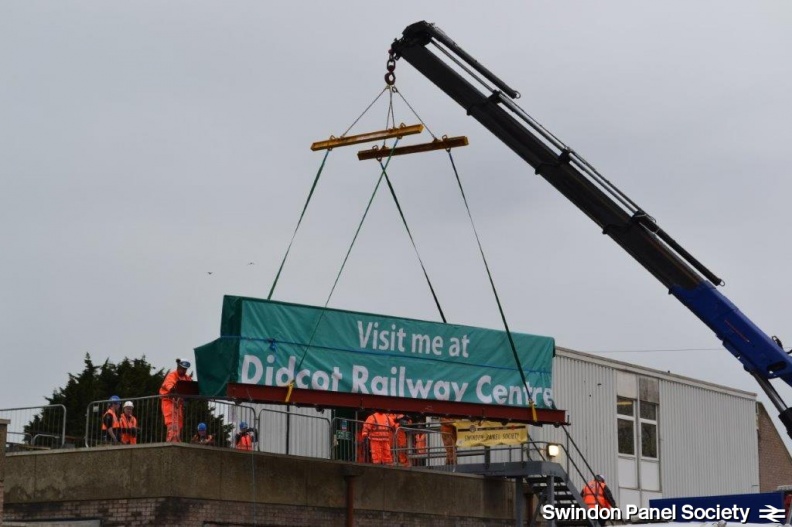 The panel lorry departed at about 9am, on schedule, for Didcot, followed by an entourage of SPS members’ vehicles taking photographs! It arrived at Didcot shortly after 10am. 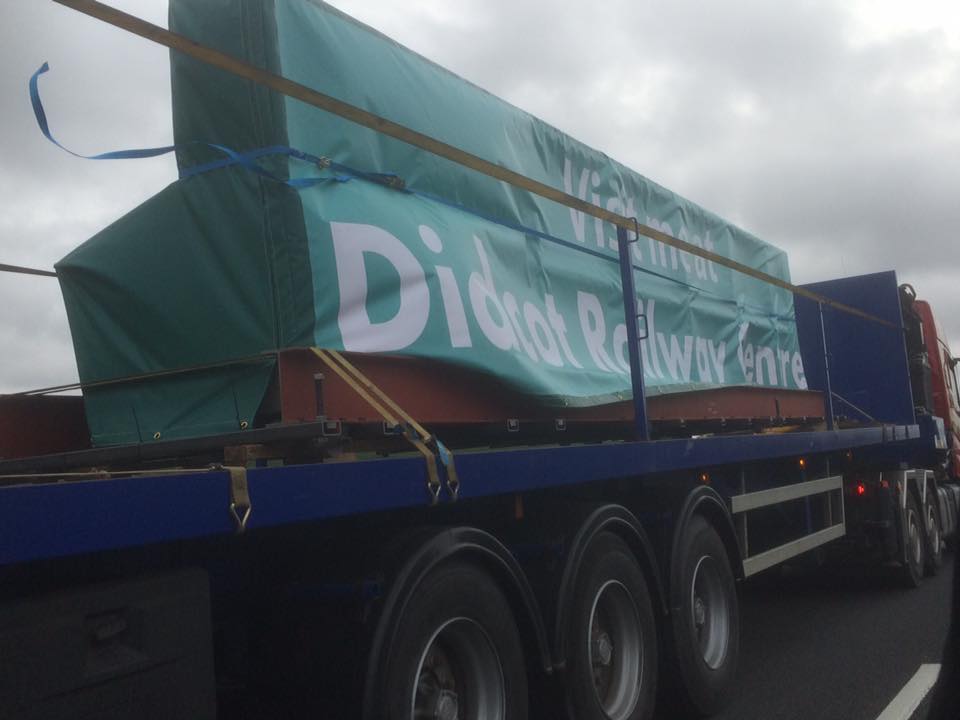 The panel was then loaded into a waiting wagon in the DB Fuel Point yard by P&D for onward transit by rail. Some other items, such as blocks and steelwork was also loaded into the same wagon.

66176 arrived at about 11.40 to collect the very short train and at 12 noon it moved from the West Yard to the Main Yard, and then about 15 minutes later shunted forward at Didcot East to set-back into the Railway Centre.

The panel then spent a lovely afternoon in the sunshine that it would have seen so little of in its life before, sitting alongside the Demonstration Line platform. Later that afternoon it was shunted into the locomotive shed for under-cover storage until later this week. 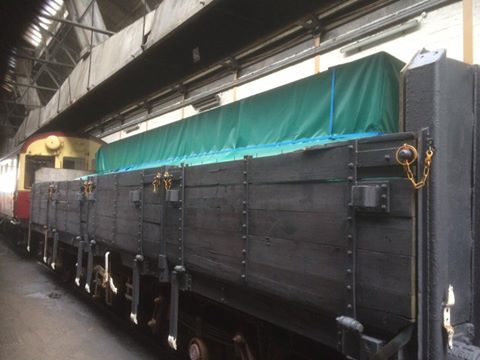 Meanwhile, at Swindon, the team worked hard to restore the building to better-than-original condition. All manner of debris of the closure, decommissioning and our removal of the panel was removed, picked up, hoovered, replaced, squared up and secured: The window steel frames, uPVC fittings and glass panels were all replaced, door frame welded back into position, the handrails on the roof replaced, the floor in the control room made safe and holes covered with wood. The control room really is cleaner a lot than we found it!

At Didcot, work continued in the afternoon in preparing the building for the acceptance of the panel on Thursday. The many tools and items of equipment that we had used over the last several weekends were also brought back into the Railway Centre and returned to their correct places.

It was a fantastic day at Swindon and Didcot. We hope you enjoyed being part of it, whether that’s because you were there or because you followed progress through the day on Facebook or Twitter.

If you took photos today, please do send them in. The photos are extremely useful for ‘selling’ the Society to prospective supporters.

A huge thank you to everyone who has helped the Panel Society reach this stage – what a fantastic achievement for all of us! WELL DONE!

However…….. we must remember that the job hasn’t finished yet!

Not least because we need to now get the panel into its new building and settled in.

The interior of the new building is a long way off completion, and then requires to be fitted with an education and interesting set of displays and equipment.

The panel also needs wiring up (which will be a huge task) so that it can work as realistically as the real thing.

Come and join us at Didcot in completing the preservation of Swindon Panel – it will be great fun!

We will be at Didcot tomorrow (Sunday 3 April) and then from Thursday (7 April) to Sunday (10 April) inclusive, during which time we will install the panel in the new building.

We will be very pleased to receive photographs of the panel on its journey today – being lifted off the panel roof, being transported by road, being lifted onto the train, then being moved by train into the Railway Centre (including through Didcot Parkway station!)

Let us welcome you, and give you the opportunity to welcome the panel, to Didcot!

This will be the first time the covers are taken off the panel, and everyone can take part in starting to re-insert the Domino tiles!