Thank you to everyone who has helped at Swindon Panel this last weekend. Fantastic progress was made and we’re pleased to say that the last of the major hurdles have now been cleared.

The two large frame beams were brought into the operating room and now complete the lifting frame at the front and back of the panel. With this being complete jacking screws were fitted to allow the whole frame, with panel on top, to be raised up about an inch and a half, which was sufficient to allow wheels to be fitted to the bottom of the frame. The panel was then moved back, against the back wall, (in the space on the right of the picture above), to align it with the doors.

The end door and window – another hurdle – were successfully removed by the team on Sunday (featuring father and son Chris and Andrew, pictured above), making a gap wide enough for the panel to escape the building on 2 April.

The handrails on the, rather substantial, walkway on the flat roof outside the building were removed by the team on Saturday (featuring father and son Jeremy and Danny).

Never let it be said that Swindon Panel won’t be a great day out for all the family! 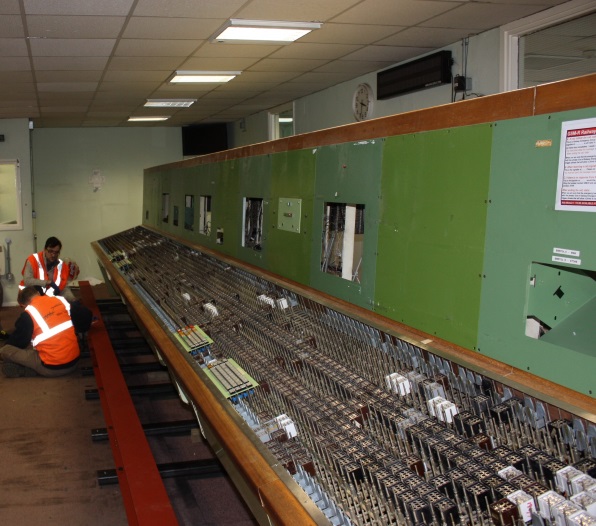 But we are getting there – our dream is finally coming true! The panel has now been raised above 9″ (23cm) off the ground, and next weekend will be raised a further 12-14″. The “runway”(!) will then be built underneath it to give it a level journey out onto the roof (over all the obstacles such as the door threshold and flat-roof walkway).

There is still A LOT of work to be done to get the panel that last little bit raised up and the runway built out onto the roof in readiness for the move which is planned for 2 April. All hands very welcome in helping with this on SATURDAY 26 MARCH, this weekend. If you can help, even if for only part of the day, please do. Swindon Panel needs you!

We are meeting only on Saturday this coming weekend (Sunday is Easter Sunday), at 10am at the panel.

The following Saturday is….. move day.